After a year’s hiatus, Google is to resume saving voice recordings made by its users – but, only if they actively opt in to the program.

In an email sent to Google customers, the company states that it has updated its position on keeping audio recordings, with new tools those that wish to manage their privacy settings.

Google currently has the ability to record audio from users of its software, such as apps, as well as hardware, including the Google Home assistant.

Google to Save Audio Recordings

In an email sent to Google users last week, the company stated that it was to pick up where it left off last year, saving audio recordings of interactions with voice assistant apps and hardware. In effect, the company is including anything that responds to the “Hey Google” command.

In effect, the company can save recordings from any device that responds to the “Hey Google” command

Google had been collecting this information previously with an opt-out approach – that is, users had to inform Google that they didn’t want their information stored. This all changed last year, however, after some high profile news stories in which companies saving audio recordings came under scrutiny.

Amazon, Apple and Google all came under fire for sharing user recordings with employees to assist in language training. Pressure was applied by countries, including Germany, whose data commissioner launched an investigation into the practice.

As of this month, Google is ready to resume saving audio recordings again, but it’s now operating an opt-in approach, meaning that users have to explicitly give the company permission to use their data. You can check and update your permissions on Google’s account page.

Google has automatically set permissions for sharing voice recordings for all users as “declined”, until you inform it otherwise.

Google has automatically set these sharing permissions to “declined”, until you inform it otherwise.

Google May Still Have Your Legacy Data

If you’re squeamish about having Google save your recordings, then you might imagine that as the permissions are now opt-in based, you can sit back and relax. However, it’s important to note that while Google is asking for your permission to save recordings going forward, any recordings it made prior to the pause could still be saved.

Luckily, Google’s privacy settings are quite simple to check and correct, if you don’t want older recordings accessible. To do this, visit the My Activity page on Google, click Filter by Date & Product, and click the Voice and Audio  checkbox. Here you will see all saved recordings (you can listen to them too, by clicking on the microphone icon).

Click on the trash can to permanently delete them. 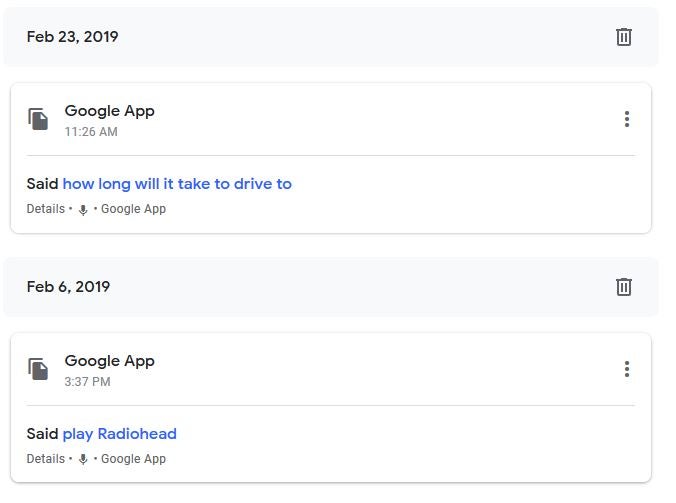 What Will Google Do With My Data?

Google, as with other companies that collect audio data, is mainly interested in using recordings to train and improve its current software to better recognise a wide variety of voices, accents and mannerisms.

This information is invaluable to Google, and a rich resource for training its AI. There’s no better data set to train a computer with than with actual, real-world examples.

However, this training doesn’t happen in a vacuum, and requires the assistance of humans to implement. There’s no way of knowing if an AI is correctly parsing user audio without a human verifying that what it assumes the phrasing is, is correct. This means that yes, there is every chance that your recordings could be listened to by Google staff – ie actual human beings.

Even if you do give Google the thumbs up to save your recordings, the company says that it breaks the audio up into snippets, and the data is anonymized before it reaches human ears.

Of course, you don’t have to give Google the right to store your information, and you won’t be penalised for not doing so. This relationship is purely one way, with Google having everything to gain from using your recordings to train its AI, but with you getting very little in return.

The post Google is Listening to Your Recordings Again – If You Let It appeared first on Tech.co.