When you first started working out, you probably hated it. Soreness hurts! But as you progressed, you no doubt embraced it—most of us consider it a signal that we’ve done our diligence and stimulated plenty of muscle growth. But is that true? 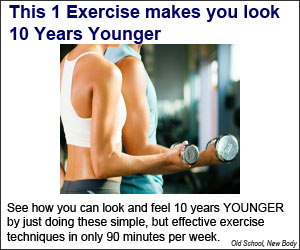 This is a guest post from Steve Holman of the Old School, New Body Program

The fact is, there are no studies connecting muscle soreness to hypertrophy. Okay, don’t stop reading yet; you will get some good stuff from being a bit sore–and you’ll probably even want to strive for it. But first you need to know what causes muscle soreness.

It’s believed that the pain is caused by microtrauma in muscle fibers—and it’s primarily triggered by the negative, or eccentric, stroke of an exercise—like when you lower a bench press, squat or curl rep.

Once your body repairs those microtears, it follows that the muscle should grow larger; however, that trauma is in the myofibrils, the force-generating actin and myosin strands in the fiber. Those strands grab onto and pull across one another to cause muscular contraction. When you control the negative stroke of a rep, there is friction as those strands drag across each other in an attempt to slow movement speed to prevent injury—and that dragging, it’s believed, is what inflicts the microtrauma.

That’s a simplification, but you get the idea. So it appears that some growth can occur after muscle soreness is repaired, but it’s in the myofibrils. More and more research is beginning to show that those force-generating strands do not contribute the majority of muscle size; serious mass comes via sarcoplasmic expansion. That’s the “energy fluid” in the fibers that’s filled with glycogen (from carbs), ATP, calcium, noncontractile proteins, etc.

When the myofibrils are damaged by emphasizing the eccentric, the body attempts to repair them as quickly as possible. That repair process takes energy, a lot of which comes from bodyfat. The process usually takes many days, so your metabolism is stoked to a higher level for 48 hours or more, helping you get leaner faster. (Note: High-intensity interval training, like sprints alternated with slow jogs, damages muscle fibers during the intense intervals, the sprints, which is why HIIT burns more fat in the long run than steady-state cardio where no muscle damage occurs.)

Do you need heavy negative-only sets to get that extra bit of size and metabolic momentum? That’s one way, but negative-accentuated, or X-centric, sets may be a better, safer way.

For an X-centric set you take a somewhat lighter poundage than your 10RM and raise the weight in one second and lower it in six. That one-second-positive/six-second-negative cadence does some great things, starting with myofibrillar trauma for some soreness. While you’re coping with that extra post workout muscle pain, remember that it can build the myofibrils and that it’s stoking your metabolism during the repair process for more fat burning.

The second BIG advantage is sarcoplasmic expansion. At seven seconds per rep and eight reps per set, you get almost an entire minute of tension time (seven times eight is 56 seconds). A TUT of 50 to 60 seconds is something most bodybuilders never get—which is a shame because that’s optimal stress for an anabolic cascade and this is the perfect way to train as you age. I call it Old School New Body!

You can do an X-centric set after your heavy pyramid—if you’re into heavy training. In other words, use it as a backoff set.

If you’re more into moderate-poundage, high-fatigue mass building, as I am with the F4X method featured in the Old School New Body method, you can use X-centric as the last set of the sequence. Reduce the weight and do a one-up-six-down cadence. You’ll get sore, build some extra size and—bonus—burn for fat. How great is that?

Till next time, stay tuned, train smart and be Built for Life.

I hope you have enjoyed this post. However, if you have some comments to make, just check the box below and leave them there. I will get back to you soonest. Thanks.

Akoli
Your personal guide to securing your future online