The Vegas Golden Knights aren’t short on X-factor type talent. With big names like Max Pacioretty, Mark Stone, and William Karlsson, it’s hard to imagine that they would need anyone else. But going into this strange edition of the Stanley Cup playoffs, the Golden Knights have another potential star in their back pocket: Peyton Krebs. 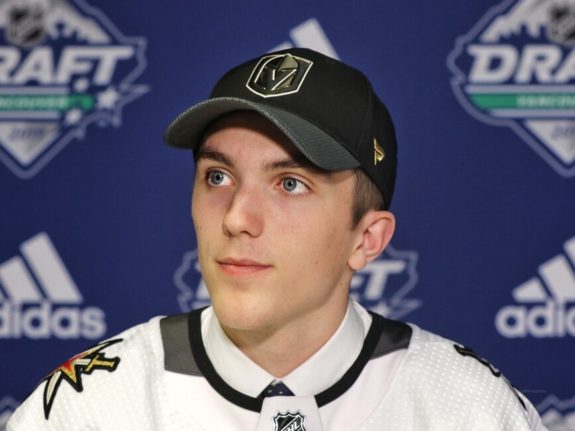 Though he is a rookie, his experience with summer hockey in the 2018 Hlinka Gretzky Cup as a member of Team Canada could be key in turning him into a game-breaker.

When the NHL typically returns to play after the offseason, it is a slow and gradual process. While it may not have been a typical offseason, the 142-day pause may as well have been, except this time, there is no chance for a gradual, easing into action. The chase for the 2020 Stanley Cup will be an immediate sprint.

This is where Krebs’ first advantage comes into play – he has been in a situation not unlike this quick turnaround before: when he was invited to the selection camp for the 2018 Hlinka Gretzky Candian team. Scott Salmond, VP of hockey operations and national teams for Hockey Canada explained that guys are “part of the selection process from the moment they arrive.” There was no time for Krebs to slowly find his game again, he needed to impress right away. 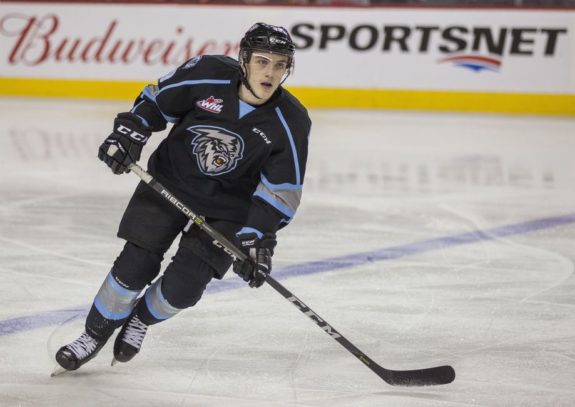 (Robert Murray/WHL) Peyton Krebs of the Kootenay Ice was the first overall pick in the 2016 WHL Bantam Draft and the cerebral forward is now in his NHL draft year.

Now with the Knights, that sense of urgency will be to his benefit. What the rookie may lack in NHL experience, he more than makes up for in readiness and ability to get going as soon as he shows up. If the Knights can get a top-form Krebs, who is recovering from an Achilles tear, they will reap the rewards of a lethal scorer. In his last season as the captain for the  WHL’s Winnipeg Ice, he racked up 12 goals and 48 assists.

With less than a month between the start of training camps and the puck dropping on meaningful hockey, Krebs didn’t have much time to mesh with his new teammates. Luckily for him, he had been asked to do this with his Hlinka Gretzky teammates. With that team, his quick chemistry helped lead the charge to Canada taking the tournament crown.

No longer is he being asked to mesh with opponents, but rather with seasoned playoffs pros. It may be his first time skating with the big boys because of his injury, but if seeing his ability to click with his Canadian teammates is any indication, Krebs will have no problem fitting into this Stanley Cup-contending side.

The biggest question mark is about where in the lineup Krebs could jell. Even though he’s a centerman, he has proven that he can hold his own on the wing. This would make an intriguing addition to the Golden Knights’ third line in place of current LW Nick Cousins, alongside Nicolas Roy and Alex Tuch. Roy also has the ability to adapt quickly to new linemates as he took part in the Hlinka Gretzky with Team Canada in 2014.

When Krebs competed in the Hlinka Gretzky in 2018, the whole tournament took place over five days, meaning the margin for error was nearly non-existent. Although these playoffs aren’t nearly as compact of a schedule, the immediacy with which the games are meaningful mimics the unforgiving style Krebs has experience in.

The 24-team format all but erases what happened in the regular season, except for the seedings in the qualifying round. Typically, coming out of an extended break, teams would have some room for error within their 82-game schedule, as there would be time to make up for lost points. Now however, whether it’s that qualifying round or the round-robin of the top four teams from each conference, it is essentially competitive hockey from the get-go.

Related: Colorado Rockies – The 10 Best to Wear the Jersey

Where some guys might struggle with getting back into “must-win” mode after months off with their kiddos or other things, Krebs has been in pressure-cooker situations of needing to get results right away, without having the opportunity to correct any mistakes.

Where this becomes the Golden Knights’ benefit is when it comes to Krebs’ maturity, making him more fit to slot into a playoff lineup. His mentality will now be more on par with that of a lot of guys in the locker room who have now made three consecutive playoff appearances. As previously illustrated, having Krebs on the ice could be of immeasurable aid to the Knights’ secondary scoring efforts.